THE NINE LEVELS OR YANAS

The Nine Levels Or Yanas

This is a reply to a question was about the nine levels: I have to apologise to a questioner (DF) for accidentally deleting both my reply and his comment.

Here are the nine levels or yanas within the Nyingma tradition of Tibetan Buddhism. There are many links on the page, but it’s probably best to find a retreat on this subject. This may sound like a scholarly subject, but it is more experiential:

In Tibetan Buddhism, many subjects are broken down into sub sections, and it all can seem complicated.

To simplify. Take an emotion such as anger or pride:

On a basic level, we may back away from an emotion, eg not allowing ourselves to become annoyed – or admit that we are annoyed.

On another level, we may apply an antidote to these emotions; for anger, we apply compassion, and for pride, we apply a feeling of equality, etc. But this antidote is a temporary measure as these emotions will return.

On yet another level, we see that these emotions do not exist.

At the highest level (Maha Ati or Dzogchen), these same emotions become wisdoms: in the very first instant of the emotion, there is a stirring within pure consciousness and the mind brightens, before we become carried away by the emotion.

There are also nine stages or levels of mental development or meditation practice – this may be of some help. 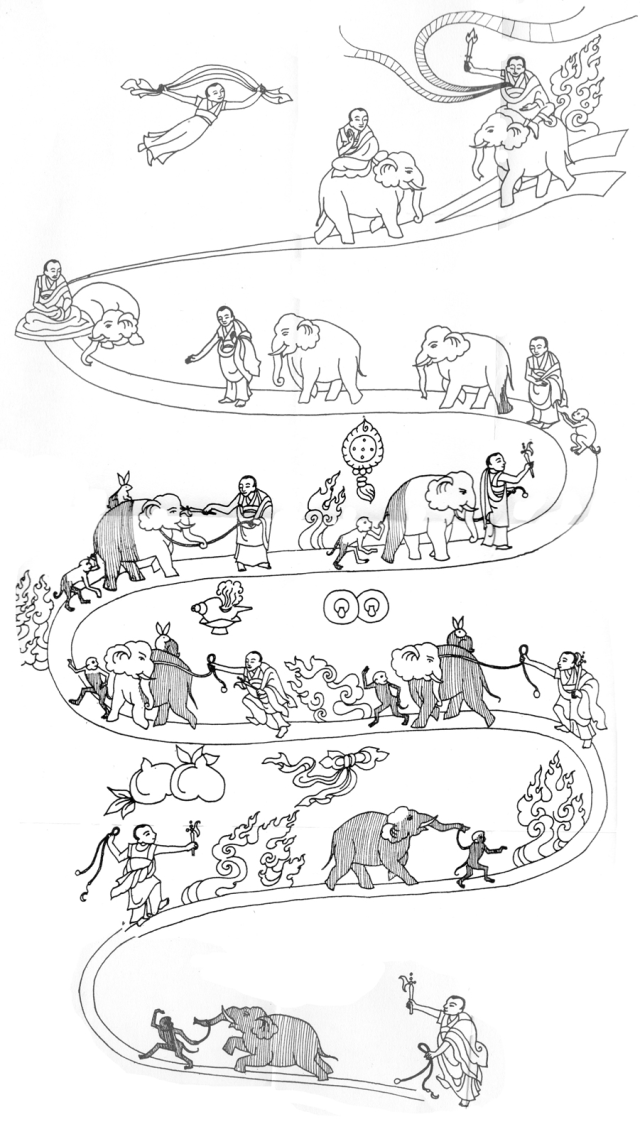 Shamatha, which means ‘calm’, is the practice of meditation to develop the ability to focus the mind in single-pointed concentration. This is practised as a pre-requisite for mindfulness or insight meditations.

In the Tibetan Buddhist tradition, this practice is described as a ‘nine stage progression’, beautifully depicted in this thangka showing a monk chasing and finally capturing an elephant. The elephant is being led by a monkey, representing distractions but, through study of the writings of wisdom teachers and meditation practice, the practitioner is able to capture and subdue the elephant. Gradually, both the monkey and the elephant turn white, representing the meditator’s ability to maintain the power of concentration.

Stages three and four represent the meditator’s ability to fix and hold his or her concentration steady. The meditator has lassoed the elephant and gradually the monkey and elephant – and even a rabbit (torpor) – turn and look at the meditator to indicate that distractions acknowledge who is in charge.

In the seventh stage, the monkey leaves the elephant and stands behind the meditator, paying homage.  In stage eight, the meditator is in complete control, and single-pointed concentration is achieved.

The ninth is the stage of mental absorption. Perfect equanimity is found and the path has ended. The elephant rests beside the meditator who sits at ease. Now, out of the meditator’s heart, streams a rainbow-like ray.

Stages ten and eleven represent crossing over into mental bliss. The meditator rides the elephant along the rainbow path into the perfection of the transcendent realm and returns bearing the sword of Wisdom. Samsara’s root is severed by the union of shamatha and vipashyana (or insight meditation with emptiness as the object of contemplation). Aware of pure awareness, the meditator is now equipped with Compassion and Wisdom to guide others on the path to enlightenment.

This entry was posted in Uncategorized. Bookmark the permalink.

3 Responses to THE NINE LEVELS OR YANAS

This site uses Akismet to reduce spam. Learn how your comment data is processed.